Most flows and transport processes encountered in nature and industry are nonlinear and give rise to spatio-temporal patterned states, e.g., wave-trains on the surface of flowing water, droplets arrayed along a thin rod, sediment patterns on the sea floor, and Faraday hexagons on a vibrated liquid pool. 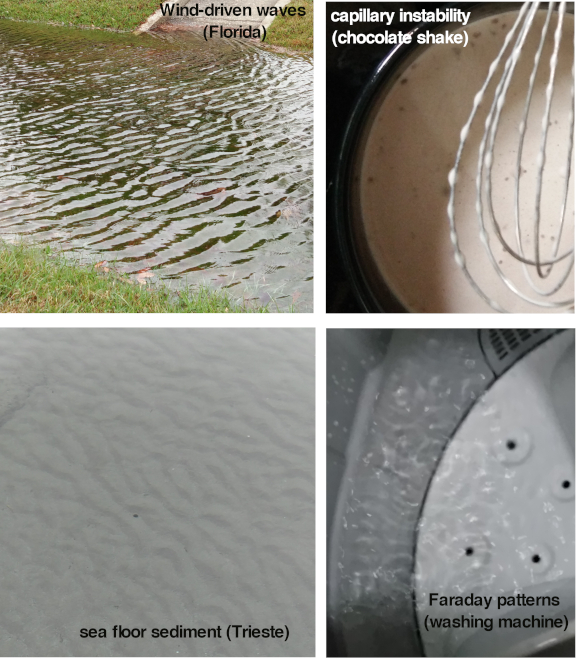 These patterns raise several fascinating questions: What is the mechanism that gives rise to these patterns? How do they manage to remain well ordered even in uncontrolled environments (figure on the left)? What are the competing forces that set the length and time scales of the pattern? Can the patterned state be suppressed or precipitated by boundary or external forces, or changes to the microscopic constituents of the system? These questions demand attention—even if one were immune to the beauty of pattern formation—because of the significant impact that self-organized structures have on heat/mass transport rates and mechanical forces.

We have a reasonably clear understanding of how simple patterns (with few active modes) emerge and evolve, at least close to onset. Typically, they arise from instabilities of base solutions that are either unidirectional flows or quiescent states. In such cases, significant progress can be made via analytical methods, such as linear and weakly nonlinear stability analysis, and relatively simple simulations. A part of our work consists of applying this theory to a variety of problems, including interfacial instabilities in engineering systems, mechano-chemical flows in biological cells and tissues, and channeling instabilities in magma flow (read more here). However, we are also deeply interested in the many fundamental issues that remain open, especially with regard to the strongly nonlinear, far-from-onset dynamics, and the (possibly competitive) interaction of distinct instability modes. Our approach is to study these issues in the context of concrete physical systems, while trying to maintain a close connection between mathematical and physical insight. Some examples of recent and ongoing work in this area are given below. 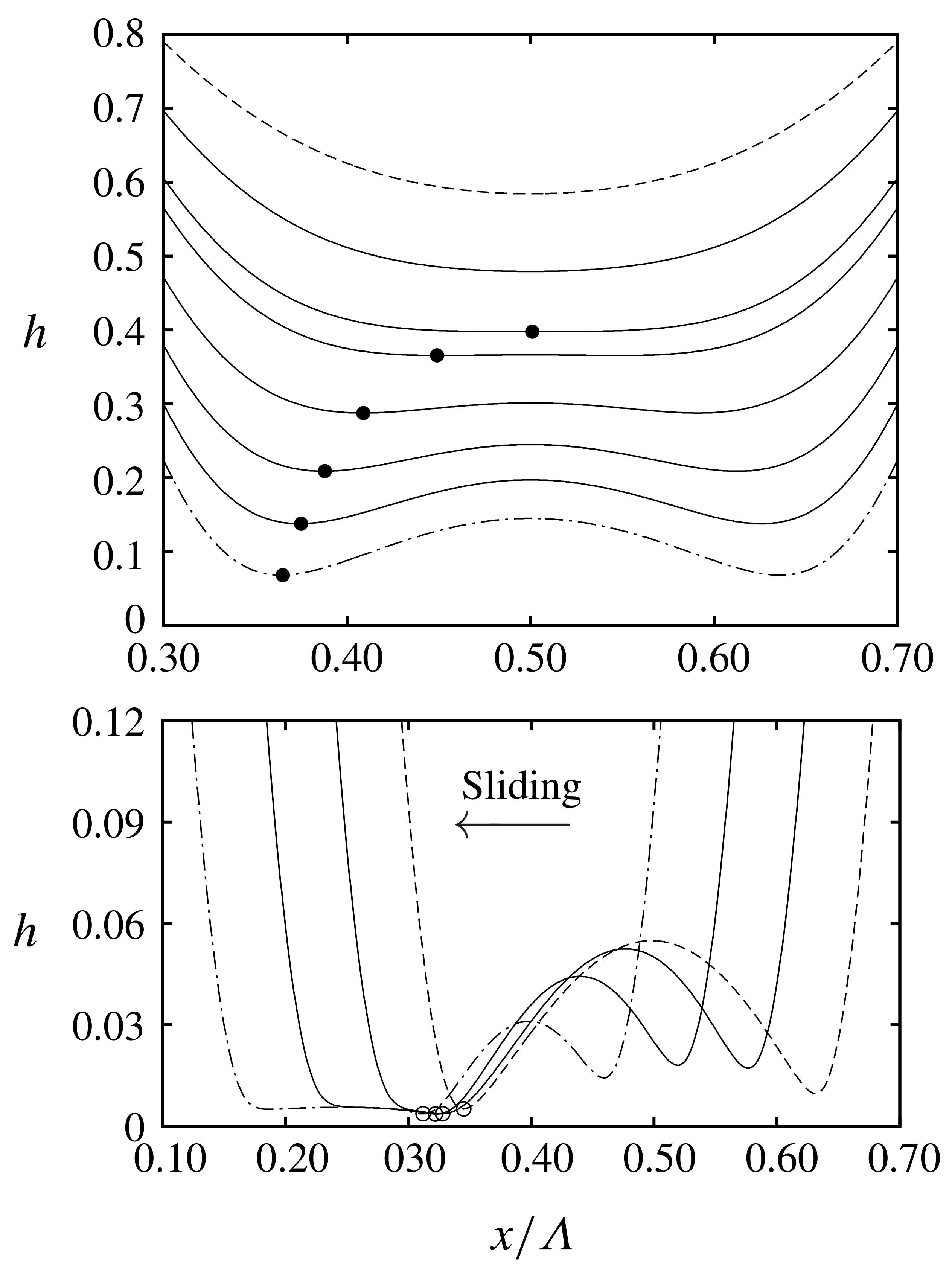 Films of liquid that are draining due to an instability (e.g.: Rayleigh-Taylor or Rayleigh Plateau) have been observed, after a long time of symmetric evolution, to spontaneously begin sliding. Here we show that this sliding phenomena is caused by a secondary instability of the evolving symmetric state. As an example, we consider a water film suspended from a ceiling that drains into drops due to the Rayleigh–Taylor instability. To analyse the stability of the time-dependent, symmetric base state we employ an approximate frozen-time approach as well as a rigorous adjoint-based transient stability analysis. The results of both methods agree well, and show that the sliding instability originates from perturbations to the thin neck-regions of the film (which form after the interface buckles as shown in the figure to the right), where capillary pressure gradients compete with viscous forces. Finally, we also show that the sliding instability can be suppressed by heating the bounding wall, which gives rise to Marangoni stresses that modify the drainage mechanism at the liquid necks. These findings have practical relevance because, as we show here, the rate of liquid drainage from the film increases dramatically when sliding occurs. 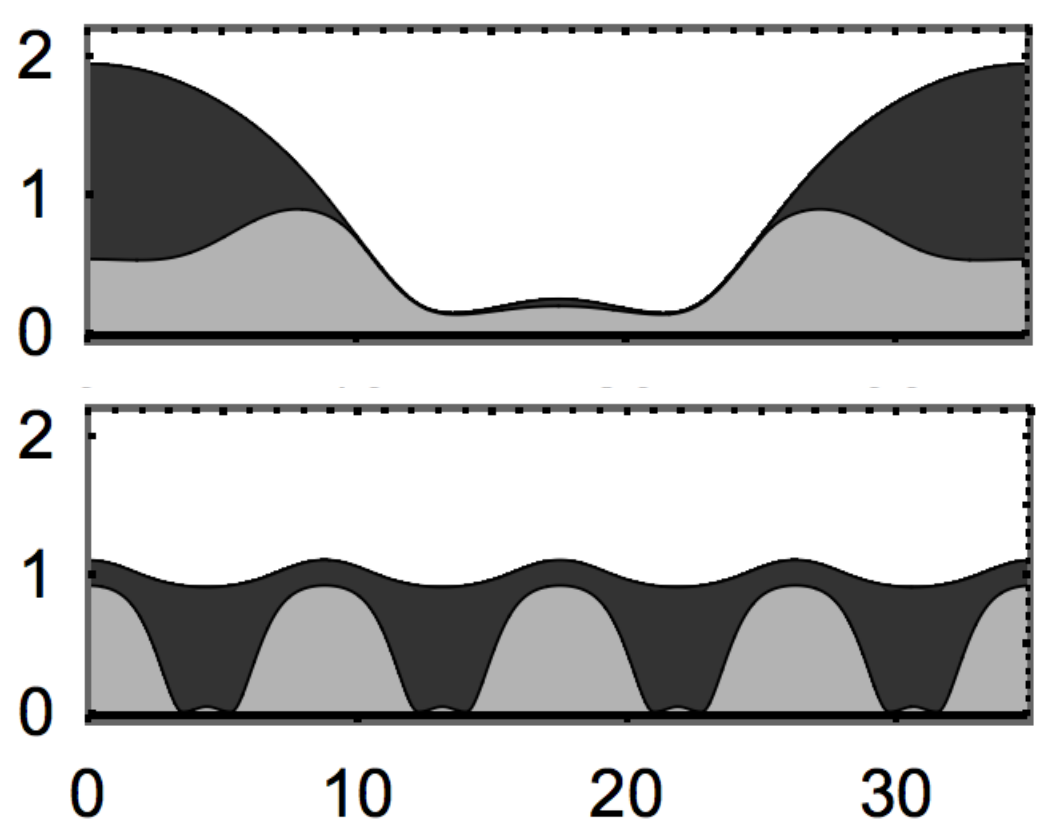 One of oldest paradigms in interfacial pattern formation is that the wavelength with the largest linear growth rate dominates the emergent pattern. It was first propounded by Lord Rayleigh in his study of the capillary instability of jets, and has since been applied to a variety of problems, e.g. the Rayleigh-Taylor instability of liquid pending from a ceiling, and viscous fingering of a water-oil interface. In the present study, we test the limits of this hypothesis, by examining nonlinear pattern selection in a subcritical system that has a linear growth curve (dispersion curve) with two peaks of equal height. Such a system is obtained in a physical situation consisting of two liquid layers pending from a heated ceiling, and exposed to a passive gas. Both interfaces are then susceptible to thermocapillary and Rayleigh-Taylor instabilities. The two peak-modes correspond to patterns that are qualitatively very different, but grow with the same linear growth rate (figure to the left). Consequently, any selection between them must occur via nonlinear effects. We use a combination of numerical simulations and low-dimensional amplitude equations to trace the nonlinear evolution of the interfacial pattern and understand the subtle interactions between the two peak modes. Surprisingly, we find that one of the peak-modes can completely dominate the other, to the extent that the final interfacial pattern is devoid of any trace of the second peak-mode. Far from being governed by simple linear theory, the final pattern is sensitive even to the phase difference between peak-mode perturbations. For sufficiently long domains, this phase effect is shown to result in the emergence of coexisting patterns, wherein each peak-mode dominates in a different region of the domain.